No Comments on “The Invisible Men”: what is hidden behind the modest outfits of the greatest couturiersPosted in Fasion Design By ReidPosted on 2021-10-172022-01-17

“I’m fast because I wear the same thing every day: a pair of APC jeans, an unmarked white tee, and a navy sweater. I need some kind of uniform “JW Anderson

When I was about 8-9 years old, and it was a sultry southern summer outside, and I was allowed to go out for a walk only after 16:00 , I whiled away this time in front of the TV, thoughtlessly switching channels. Then on the old Sanyo he showed some kind of channel, on which there were screenings from morning to evening. And although then my childish mind was not at all interested in the world of glamor, fashion shows and modeling, I watched the shows to the end. And traditionally, after the final passage of all the models, the designer came to the guests of the show to bow. It was then that I had such a naive question: “Why did he (a) dress so simply, and not in the beautiful clothes that the models have shown?”

And quite recently I decided to return to the question again, why designers come out to their guests in inconspicuous images, but this time to carry out a research (ideally, find an interview where the fashion masters themselves answer this question).

What is this? Uniforms, corporate identity, conscious consumption? Answer: Put it all together, the answer only differs from designer to designer.

A young British designer Jonathan Anderson in his latest fall-winter 21/22 collection came to the idea of ​​“slowing down”, abandoning the rule of creating 60 looks, thereby “straining” his team, because “the last six months was a real nightmare, ”and considers her a“ portal ”to contemporary art through her work.

His latest lookbook, shot by Jürgen Teller, is a prime example of an art gallery that can be visited from the comfort of the couch. Here are balloon dresses, knitted blankets (which, by the way, the designer thinks can be hung on the wall), and a voluminous, multi-layered cloak side by side with incredible surreal vases from the famous ceramic artist Magdalena Odundo and artist Lavender Corbett. And although this is not a digital show, everyone who follows Jonathan’s work will realize that he came to the shooting in his usual Levi’s or APC, a blue Uniqlo jumper, Nike or Converse.

According to the designer himself, he likes clothes from Uniqlo collaborations with JW An-derson more, as they are practical and versatile. This is what his namesake brand is aiming for. After all, creating such complex silhouettes, behind which there is some kind of global or acute social theme, in your personal outfit you want simplicity. The advantage of this choice of things is time savings in the morning (especially if you like to sleep longer).

Vera Wong, who creates wedding dresses that most girls dream of wearing on “this special day,” strictly adheres to a rather ascetic outfit. It can even be called “stereotypical”: total-black, and short sleeves are a must of her everyday outfits. Of course, wearing total-black is more about the stereotypical thinking imposed on us by the world of cinema. Still, in Vera Wong, this stereotype was confirmed. Only we do not criticize! The designer shares the opinion of Jonathan Anderson – at least in choosing his outfit for every day, move away from the complex styles of his collections.

When looking at the shocking, eccentric collections of the French brand Jean Paul Gaultier involuntarily thinks that the couturier himself will now appear in the same avant-garde look, but he went out to the guests (most often) in a vest and dark trousers, and sometimes, like Vera, in total black.

The most “scandalous” thing that could be seen on Gaultier himself is the ensemble of a vest and a kilt. By the way, there is no need to tremble before the agender fashion as a “neologism” in the fashion industry. Jean-Paul Gaultier already in 1984 in the first men’s collection “Man-Object” released men in skirts on the catwalks. And then the audience was not ready for such a drama and a scandal erupted.

His choice in favor of the vest is due to childhood memories. “As a child, my mother dressed me in sweaters and jumpers with white and blue stripes. Then I developed this print in all collections, both in ready-to-wear and in haute couture. I used all existing materials for decoration – ostrich feathers, lace with Swarovski crystals, sequins – and did it in every possible and impossible way. ”

A recipe for a discreet yet elegant look from Miuccia Prada, which she has been wearing for many years, and is not going to change anything in the near future: a white pleated skirt, a white T-shirt and a dark blue jumper. She appeared in this way after the show of the spring-summer 2021 collection with Raf Simons, answering questions from fans of the House. 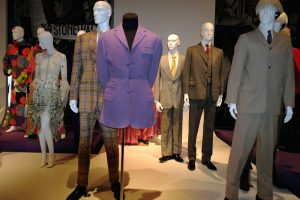 It would not be politically correct to “break” the most discussed pair of the fashion industry, so I will continue to analyze the choice of bows of the Simons-Prada tandem, already on the example of Raf. His collections are admired, his work is criticized, but Raf leaves experiments with color, texture and cut for work, in life he chooses practicality: loose shirts, voluminous sweaters, dark trousers.

“The Invisible Men”: what is hidden behind the modest outfits of the greatest couturiers